This Candle is a Servant-Leader

Hanukkah Goes Up in Flames 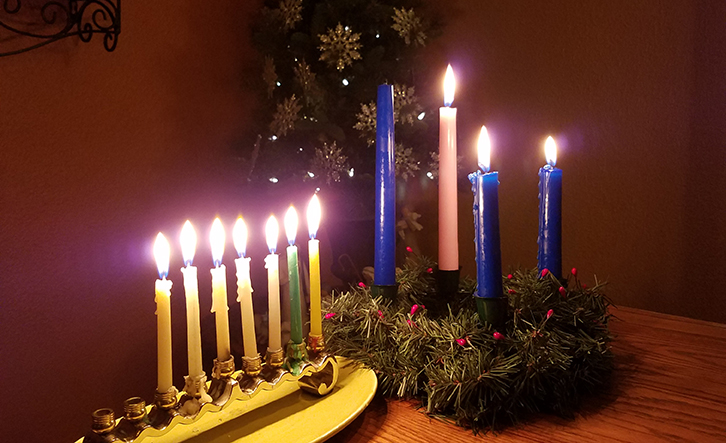 Last night our family lit the last of our Hanukkah candles. We almost didn’t make it to the end.

I’ll explain: It takes a lot of candles to get all the way through Hanukkah. Since the idea is to let them burn themselves out, none of the candles can be reused. In case you’re new to this, here’s the drill: Every night you’re supposed to light the “main” or shamash candle first, with a lighter or something, then use that candle to light the others. On the first night, the shamash lights one other candle, on the second night two, and so on. If you follow this, then by the end, you’ve used up 44 candles total. The trouble is, we had 36 candles. That meant we’d only have one remaining candle for the eighth night. So we had two options:

2. Bend the rules a little.

As much as I’d like to say we chose number 1 (because honestly, what could be more appropriate for Hanukkah than our candle supply lasting longer than it’s supposed to?) we chose to bend the rules. O we of little faith.

Instead of letting the candles burn out on the seventh night, we blew them out halfway through and saved them. Then, on the eighth night we moved the half-burned shamash candle into the eighth position, and put our last new candle in the shamash spot. It looked appropriate, because now the shamash candle towered over the others, as we imagined a good shamash should.

But then something interesting happened.

We lit the candles per usual, and watched them burn down, expecting the eight regular candles to burn out first, and the shamash to last longer. But instead, the intense heat of the eight candles flanking the shamash caused it to melt more quickly than the others. By the time the eight candles were burning out, the shamash was right there with them. All the righteous glory it commanded at the outset had melted into a sorry pile of white wax.

Rather than type the word shamash 20 more times in the course of finishing this article, perhaps I should attempt a translation. And I say “attempt” because it’s not terribly straightforward. Some refer to the shamash candle as the Leader Candle, and some call it the Servant Candle. This might suggest that the word is a Contronym, in that it carries two contradictory definitions (like “cleave”, “seed”, or “handicap”.) Is the shamash candle the leader? Or is it the servant?

Perhaps it’s both. Because this is exactly the kind of contradiction that Yeshua (as fully man and fully God) loved to embrace. His most famous attempt to teach this to his disciples was the washing of the feet at the Last Supper. Everyone was seated and ready for the meal to begin, but first a servant had to come and wash their feet, which were filthy from walking dusty roads in open sandals. Except, there was no servant. Yeshua might have been expected, as their rabbi, to go and find a servant. But instead, he took off his robe, wrapped a towel around his waist, and did the dirty work himself. The Leader became the Servant.

“After He had washed their feet and put His robe back on and reclined again, He said to them, ‘Do you understand what I have done for you? You call Me Teacher and Master—and rightly you say, for I am. So if I, your Master and Teacher, have washed your feet, you also ought to wash each other’s feet. I have given you an example—you should do for each other what I have done for you.'” (John 13:12-15)

Back to our burned-out Hanukkiah. It’s no surprise that Jewish believers in Yeshua would find him symbolized in the shamash candle. After all, he is the Original Light—the Light of the World—by which all other lights are kindled. And by this comparison, it’s no contradiction to refer to the shamash as both a Servant and a Leader. Perhaps we should call it both: The Servant-Leader Candle.

Then, as we light it, we can remember Yeshua‘s call to his followers—to do for each other what he has done for us. As John says in his first epistle, “We have come to know love by this—Yeshua laid down His life for us, and we also ought to lay down our lives for our brothers and sisters.” (1 John 3:16)

Often we fail at this completely. Whenever we find ourselves in a position of leadership or influence, we like to stand tall above the rest. When I’m in charge, I want it to be clear that I’m in charge. I worked hard, studied hard, and overcame adversity to earn this role, and I want it to be known. Perhaps I even believe that others will benefit when my expertise is recognized, when my ideas are valued. But our faith teaches us that this attitude is selfish and immoral. Worse than that, it’s doomed.

In his time on earth, Yeshua never stood above the crowd. Quite the contrary: he lowered himself, humiliated himself, below even the dregs of humanity (Philippians 2:6-8). He became the scum of the earth, and called us to do the same. We can see what happens when we don’t. No matter how lofty we begin, in the end we are melted down to size, and it happens much faster than we think.

When we light the shamash candle each night of Hanukkah, it’s only natural as believers that we should think of Yeshua. But my prayer for you, and for all of us, is that we also see ourselves. Because Yeshua (along with John, and Paul and so many others) has compelled us to follow this example—that even as we give light to others, we ourselves would stand below them—serving with the humble heart of our Messiah.