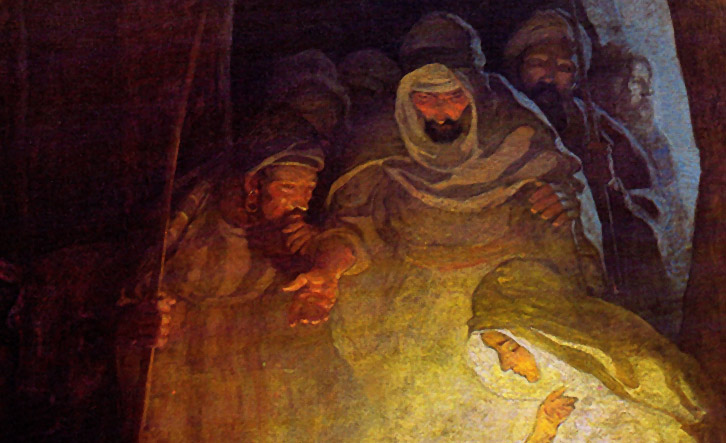 You may celebrate Christmas. Or you may not. But since everything is closed today, it couldn’t hurt to take some time to reflect on the birth of our Messiah.

Toward that end, allow me to recommend this fictional short story that I wrote last year, combining Christmas with the Feast of Tabernacles. Call it a Sukkot Nativity Story, if you will.

Many scholars, especially those of the Messianic Jewish persuasion, have concluded that Sukkot (late September, early October) is the most likely season of Yeshua’s birth. This story is based on that premise. And while some teachers prefer the notion that Yeshua was born in a private home, rather than a commercial inn, there’s still a chance it was the latter. Here we explore the premise of the inn, as a plot device to connect with the traditional image of the Nativity, but with a twist. Discussion over the details is always welcome, but above all, enjoy the story. And enjoy this Christmas holiday, in your own way.

A Short Story by Ryan Wiksell

Last night my inn was full. Tonight it is empty.

In the days leading up to Herod’s census, I have turned many a traveler away. I thank Adonai that I don’t have to do it often, but this week it has become routine. If I knew of another inn that could receive them, I would send them there with my compliments. But Bethlehem is overrun. No rooms. No vacancy.

I don’t know where my latecomers ended up sleeping, and to be honest, I’ve tried not to think about it. What can one humble innkeeper do?

This is why the events of this night have been so astonishing. As I have said, many travelers came to me who I had to turn away with nowhere to send them. But when a young couple arrived at my door, the wife heavy with child and weary from the journey, I had to do something. Imagine a baby being born in the gutter outside my door!

Although mine is an inn of modest size, I have a large stable for my guests to corral their donkeys and sheep. Miraculously, one booth remained empty, without any such beasts in residence. With a red face I offered this inhuman accommodation to the couple, who accepted enthusiastically.

I prayed that night that the birth would tarry until a room opened up for them, but it was not to be. I am known to be a deep sleeper, and very little can wake me once my slumber is established. But in the second watch of the night I heard the sharp cries of a newborn piercing my second-story window. It must have been going on for some time before I heard it, because I saw through the curtain a small crowd gathered below, dodging the sheep manure and huddling around the young couple’s booth.

I rushed downstairs and out into the brisk autumn night, afraid that my outdoor guests may have attracted unwholesome attention. But my fears were in vain.

Before I continue my story, there is one thing I should explain. This night was the first of our eight-day Hebrew festival of Sukkot, or Tabernacles. In the Torah, Moses prescribed during these days that all children of Israel should abandon their houses of stone and clay to live in tiny booths of their own construction. They were to be closed enough to protect from the wind, but open enough to afford a view of the stars above. In this way we are called to remember the way our ancestors lived as they wandered the desert between Egypt and the Promised Land.

Frankly I find the whole thing a bit old-fashioned. Quaint, really. And apparently so do my guests. That is why they stay with me during Sukkot, in the comfort and privacy of an indoor room. Fanatics in Jerusalem may still follow the ancient tradition, but we modern Judeans take it symbolically. As a result, none of my friends or relatives have continued the ritual.

I have no way of knowing the usual practices of our young couple with the newborn, but on this night it appeared they were carrying out the Sukkot tradition almost by accident. There they were, out in a cold, open stable with a patchy roof and a view of the stars on this, the first night of Sukkot. And there were my guests, every last one of them, gathered around the brand new family. When I arrived to join them, I discovered their hospitality to be in excess of my own. Each one had offered to vacate his room in favor of the couple and their precious baby. Some even begged them to exchange places, but the father declined. He said his family was safe and warm, and he could never impose.

It was then that the most astonishing thing occurred. The guests, each in their turn, refused to go back to their rooms. I urged them to leave the little family be, but instead they began to gather scraps of wood from around the stables and set up shelters of their own surrounding the scene, gazing with special awe at the advent of a new life. It was as if they had never before seen an infant, so reluctant were they to turn away.

One by one the booths were constructed. Straw was gathered to create a partial roof over each. In time, the baby stopped crying and hushed words were exchanged about the beauty of this collection of peaceable vagrants huddled together in the cold. I shook my head in awe, and turned to go back to bed, but found it impossible. I could not turn away. Soon I gave in, and began to set up a booth of my own on the perimeter.

The third watch was announced from the tower in the market square. By this time the little audience had fallen silent, but no one fell asleep. We hugged our knees and watched the father swaddle his little boy. We turned away respectfully as the mother brought him to her breast. It occurred to me that we ourselves were exiles now, refugees from our comfortable rooms, drawn into the elements by something wondrous but ill-defined.

As our vigil approached the morning hours, the heavens turned through the straw above our heads, revealing a star in the east unlike any we’d ever seen. It burned like a bonfire in our eyes, with tendrils of bluish light thrusting like spears in four directions. Every face turned and glowed in its majesty, while every heart raced with wonder. Surely Adonai had spoken. But what was he saying?

The cold had vanished from our minds. The hard ground beneath us, and sheep manure around us were all but forgotten. One day we may learn more about what we had witnessed here, but for the moment there was only this. Only here. Only now.

We were no longer guests at an inn. We were wanderers in search of a sign; in search of hope. A hope which may now be closer than we’d ever imagined.