The Lamb of Exodus 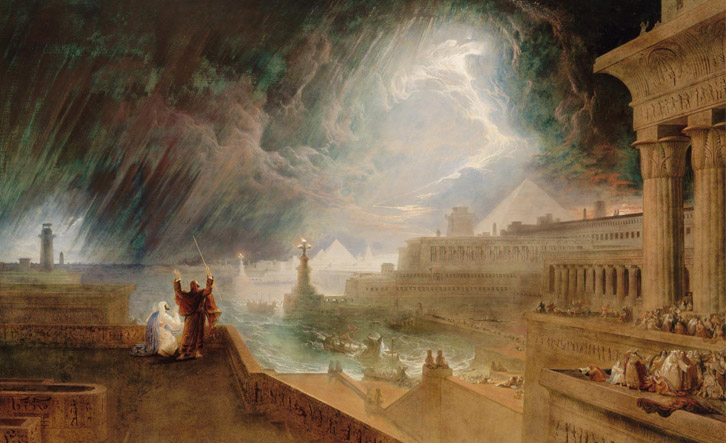 This is Part 1 of the 3-Part Passover Lamb series. Here’s Part 2: The Lamb of God

John filled the cup a second time, and proceeded with the order. “Though we are free now, we were once slaves. Not our forefathers. Not our fathers. But us. To this very day we owe our freedom to the burning bush, to the plagues, to the parting of the waters. We were slaves, but God has set us free.”

“And some of us have become slaves again.” James murmured.

Next came the Story of Deliverance, in which John recounted—in the briefest way he could—the story of Moses as a baby in the Nile, as a murderer on the run, as a shepherd encountering the voice of God, and so on. Nine times the Almighty put terrible wonders in his hands, each of which should have been more than enough to sway a nation, but nine times Pharaoh’s heart was hardened. And on the night of the tenth wonder—the death of the firstborn—the occasion found its name: Passover.

For the first nine plagues, the Hebrews had been exempted on the basis of their bloodline. But this night was different. The blood of another would be required—the blood of a lamb. The tenth plague required a test of faith. Sacrifice a lamb and paint its blood on the doorposts of your house, and your family will be rescued from the specter of death. Whosoever believes shall not perish, but live.

Every time the image of a lamb appears in Scripture, it signals a turning point. The tenth plague (Exodus 12) may indeed be the introduction of the lamb motif in Scripture, but it is not the first symbolic use of a sheep.

The Ram Before the Lamb

Long before the Lamb of Exodus makes its appearance, the Ram of Genesis sets the stage. And, like the lamb, it does so in the context of life-saving faith in God. It is the ram stuck in a thicket, provided by God for Abraham to sacrifice on the altar, in place of his son Isaac. If Abraham had not obeyed God—had not trusted God to keep his promise—the ram would never have arrived.

I believe that Abraham had a vision of what would occur near that same mountain, many centuries later. In his mind he may have seen a beloved Son, a “Lamb of God” being surrendered to death by his Father and raising to life again. Perhaps this gave Abraham faith that God would raise Isaac from the dead. Or perhaps that God would provide a sheep as a substitute, which he did, in the form of a ram.

The Straw that Broke Pharaoh’s Back

Much later, when Abraham’s descendants are being freed from slavery in Egypt, the sheep serves as a substitute again, this time for the death of the firstborn. When the Angel of Death passed through Egypt, its mission was to see that one death was dealt on every household. Although this is harsh, it was the final straw of justice for a kingdom that had repeatedly mocked and rejected the One True God. We sometimes refer to him as a “God of second chances“, but this was Egypt’s tenth chance.

This occasion also created a test of faith for the Israelites. Each family now had the opportunity to “show” the Angel that death had already been achieved for that household, and no further judgment was necessary. Thus, the family with the blood of a lamb on its doorposts would be “passed over”.

But this couldn’t be just any lamb. It had to be a male, one year old or less, without defect. The chosen creature could not be old, or lame, or sick, and thus close to death. It had to be a true sacrifice—a real loss. To compound the sense of loss, the lamb had to live with the family for four days, allowing them to bond with it like a pet.

That makes two important criteria for the lamb: (1) It had to be perfect, and (2) it had to be loved. Both of these features make it a valuable animal. In other words, this act had to mean something. If it hadn’t, no faith would be required at all.

Technically speaking, Yeshua could have come down from heaven as a fully-formed adult and landed right on the Cross. He would still be our perfect sacrifice—the Lamb who takes away the sin of the world. And naturally he would be perfect because he’d be fresh from heaven.

But instead, God gave the world 3 years to know and love Yeshua. And he gave Yeshua himself 33 years to wrestle with what it means to be human. To suffer pain and temptation, to experience hunger, thirst and exhaustion, and respond with unwavering faith. He had every opportunity to be corrupted and blemished, but instead he endured, and arrived at the Cross as a perfect, beloved and infinitely worthy sacrifice.

One Good Sheep Deserves Another

Again, every time the image of a lamb appears in Scripture, it signals a turning point.

In Exodus, the Passover lamb was the final rite of passage to freedom. It was the event that initiated Israel’s identity as a nation, and triggered their departure toward the Promised Land. But inwardly, the Hebrew people would remain slaves for centuries. Slaves to selfishness, hatred and mistrust (as we all are.) They needed a second lamb to appear on the scene, not to free them from Egypt or Babylon or Rome, but from the corrupting work of the enemy in their own hearts.

In the next article, we’ll look more deeply at that second lamb: the Lamb of God who takes away sin, and serves as the turning point of all human history. Read Part 2: The Lamb of God.