A Tale of Two Holy Days

12 Parallels Between Shavuot and Pentecost 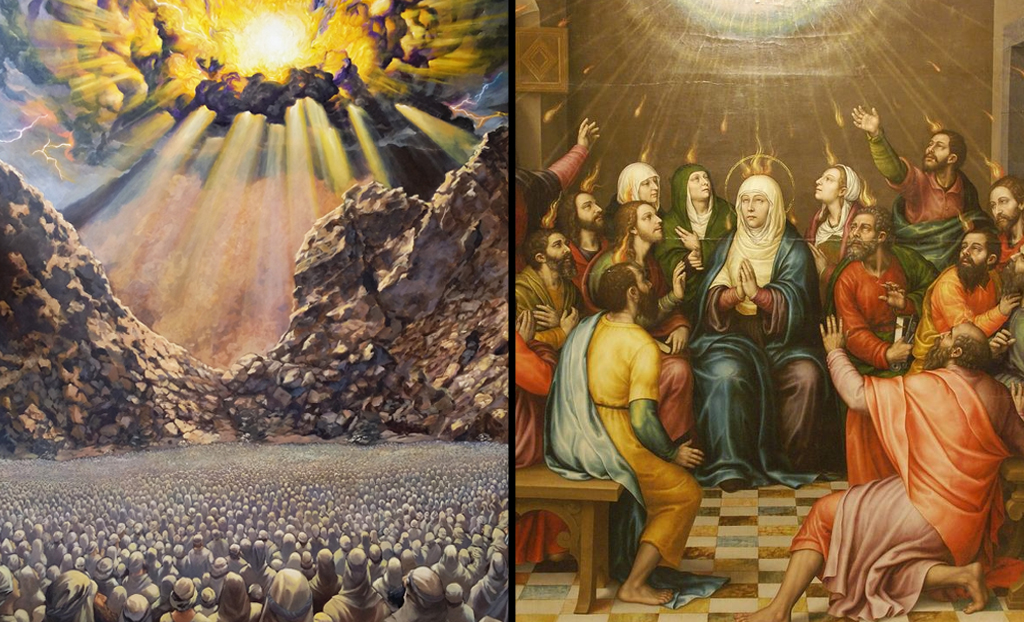 In our first article about Shavuot, we explored the dynamic between body and spirit. Materialists claim that spirit doesn’t exist at all. Dualists believe that both exist, but that the spirit world is wholly separate from and superior to the physical world. God, however, shows us a third way, by embedding every spiritual act of redemption in a physical matrix: real people, real times, real places.

The stories of these acts, and the messages inherent in them, were never intended to be passed down through the generations like a floating cloud. Instead, it’s our responsibility (and privilege) to dig into that original matrix, to unearth the deeper meaning that lies beneath the words.

Pentecost is a holy day of the Church calendar that is particularly prone to the dualists’ disembodied spirituality. Everything that happens at the original Pentecost, in Acts chapter 2, seems a bit otherworldly. But if so, it is only because we overlook the cultural context that no first-century Jewish reader would have missed. That is what this article is about: revealing the Jewish holiday of Shavuot (specifically, the giving of the Torah at Mount Sinai) that lies beneath the events of Pentecost.

So here are the parallels we see between the two holidays, starting with the four elements of classical metaphysics: Earth, Wind, Fire and Water. These will be followed by a fifth element (or quintessence) which ties them together. After that, we’ll look at some additional parallels that add meaning to the juxtaposition.

Shavuot, in its original form, is a festival celebrating the wheat harvest. Jewish people were expected to come to the Temple from every nation to make wave offerings of two loaves of bread. Since the quality of this produce was seen as a foreshadowing of the coming fall harvest, Shavuot was a time to declare hope and trust in the fullness of God’s blessing. The two loaves served as a symbol of this.

Later (during the Second Temple period and beyond) the emphasis shifted from a celebration of the harvest, to a commemoration of the giving of the Torah. Because Shavuot takes place seven weeks after Passover, it aligns in the Exodus story with the arrival of the nation of Israel at Mount Sinai. And because of what happened there, the mountain is revered as a holy place. As sacred earth. And when God arrived, that earth shook violently. (Exodus 19:18)

When the Holy Spirit was poured out on the Shavuot (Pentecost) after Yeshua’s ascension, it happened at another elevated piece of sacred earth: the Temple Mount. Even though the Temple curtain had been torn in two just 50 days prior, God still chose this very specific place to begin his multi-lingual, multi-ethnic Messiah movement. And the result of the Spirit’s arrival on that day? A great harvest of souls, as we’ll explore below.

In both stories, of Mount Sinai in Exodus and the day of Pentecost in Acts, the weather played a major role. “In the morning of the third day, there was thunder and lightning, a thick cloud on the mountain, and the blast of an exceedingly loud shofar. All the people in the camp trembled.” (Exodus 19:16) On the day of Pentecost, Luke writes that “suddenly there came from heaven a sound like a mighty rushing wind, and it filled the whole house where they were sitting.” (Acts 2:2)

Like a thunderclap in a horror movie, extreme weather is used to get the audience’s attention. Something greater than us is happening here.

“Now the entire Mount Sinai was in smoke, because Adonai had descended upon it in fire. The smoke ascended like the smoke of a furnace.” (Exodus 19:18) Fire often serves as a sign of God’s dramatic arrival, sometimes in judgment and sometimes in revelation.

The parallel with Pentecost is obvious, but the similarity makes the difference even more dramatic. At Mount Sinai, God arrived in a single massive inferno, like the eruption of a volcano that envelops the summit in smoke. At Pentecost, the fire was just as significant, but far gentler, and with a different message. Before, the point was to draw everyone’s attention to the Almighty Creator, and his monolithic message to the new nation about to be birthed. But now, individual tongues of fire meant that individual children of God were being anointed with the divine authority to carry God’s message to the nations.

Water is a symbol of cleansing and purification, for obvious reasons. In preparation for God’s revelation at Sinai, he has Moses “sanctify” the people, and instructs them to wash their clothes, in water of course. (Imagine how dirty they would be after walking fifty days through the desert.) So at Sinai the cleansing was a preparation for the people to receive the Torah from God, but at Pentecost, water came after the fact.

After the tongues of fire descended on the group of believers, and they spoke in many languages, Peter preached to the crowd. When they responded with open hearts, he instructed them to “Repent, and let each of you be baptized [in water] in the name of Messiah Yeshua for the removal of your sins.” (Acts 2:38)

The four elements were the foundation of classical metaphysics for centuries before Aristotle introduced a fifth element (or “quintessence”, which he called “aether”) to serve as a source and a culmination of the first four. If believers were looking for a symbol that gives rise to all other symbols, surely it would be the Word. It is by the Word of God that light and the universe came to be, and by the Word that is Yeshua that all those created in his image might be rescued from darkness.

Despite the theatrics surrounding Mount Sinai, the ultimate purpose of the encounter was to receive a Word from God. What sets this apart from all other prophetic words, is that God etched them into stone with his own finger. (Exodus 31:18) What would you give to see a sample of God’s penmanship?

The Word was also at the very center of the day of Pentecost. Although this time, like with the fire, it served a very different purpose. Instead of a single epic message spoken through a single prophet, it was divided into every language, to speak of the mighty deeds of God to every tribe who had traveled to worship at the Temple. Although they came from every corner of the globe, the people were all there for one reason: to commemorate the giving of the Torah. With that in mind, which “mighty deeds” do you suppose the believers proclaimed in those diverse tongues?

6) Culmination. Although Passover is the most significant holiday in the Jewish calendar, it is just the beginning of a journey that leads to Shavuot, and the giving of the Torah. And just as Holy Week is at the heart of the Church calendar, it culminates in Pentecost, which gives birth to a new global community of believers.

7) Counting to 50. Shavuot is the Hebrew word for “weeks” referring to the seven weeks after Passover, leading up to the Feast of Shavuot, which was the next day. This is called the Counting of the Omer. Pentecost is the Greek word for “50th” to indicate the final day of the “50 days of Easter“. (It’s worth noting that “Eastertide” technically begins on the evening before Easter day, which is another reflection of its origins in Jewish time.)

10) Law. Shavuot commemorates God writing the Law (Torah) on stone, and Pentecost is the time when the Spirit of God wrote that Law on our hearts.

11) Trumpet. “[There was] the blast of an exceedingly loud shofar … When the sound of the shofar grew louder and louder, Moses spoke, and God answered him with a thunderous sound.” (Exodus 19:16,19) At Mount Sinai, the shofar (ram’s horn, or trumpet) began at “exceedingly loud” volume and then got louder and louder. I believe “ear-splitting” would be an appropriate adjective here. The Israelites were to make no mistake that this was God was speaking, and not the work of Moses. At Pentecost, Luke makes it clear that the outpouring takes place at precisely 9 in the morning. (or the “third hour”) Whenever Scripture is specific about the time of day, there’s always a reason. What is the reason in this case? Because the morning Temple sacrifice occurred every day at the third hour, accompanied by the sound of a shofar.

12) 3,000 People. Exodus: “So the sons of Levi did as Moses said, and that day from among the people there fell about 3,000 men.” (Exodus 32:28) – Acts: “So those who received his message were baptized, and that day about 3,000 souls were added.” (Acts 2:41) Both of these verses started with the word “so”, meaning they are a result of what came before. Because the followers of Moses were unfaithful and put their trust in a golden calf, about 3,000 people died. And because the followers of Yeshua were faithful and trusted God for “power from on high”, they received that power, and 3,000 people were saved. Coincidence?

God used the great outpouring at Pentecost both to reflect the momentous scene where the Law is given, and to unravel the effects of sin, which is something the Law can never do. That’s why we see some of the above parallels affirming the Shavuot tradition, and other parallels that appear to fulfill it, wrap it up, and start something new.

May your celebrations of Shavuot and Pentecost this weekend be blessed with a new work of God in your life.