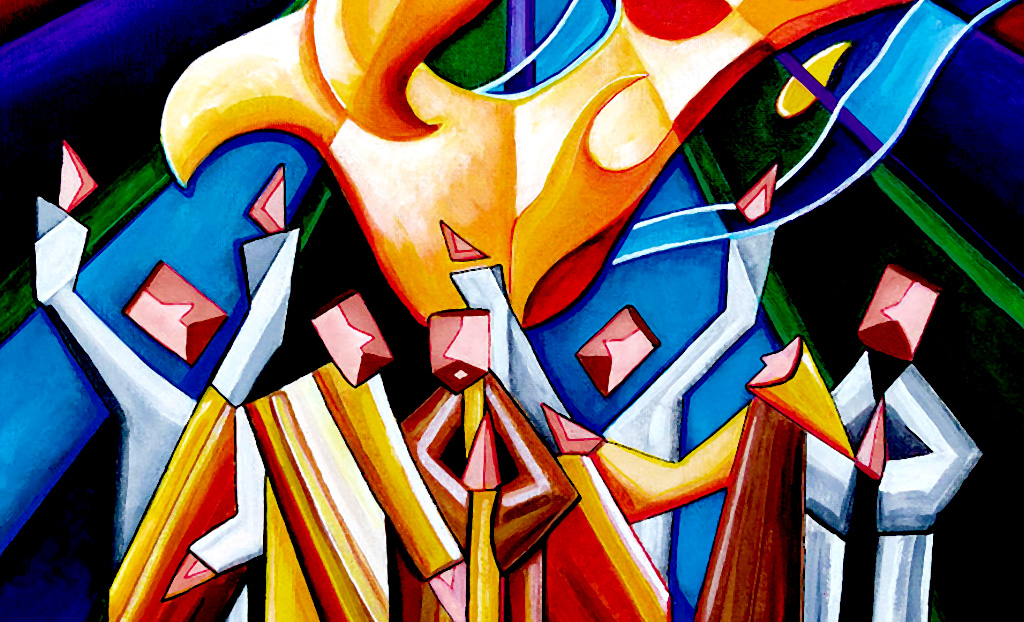 Pentecost is upon us. Shavuot. The Feast of Weeks. The 50th Day.

Few moments in the story of Yeshua offer stronger parallels between the New Covenant and the former one. The event Christianity recognizes as “Pentecost”, in fact occurred on the Jewish holiday of Shavuot (the Feast of Weeks). More is written about this elsewhere on this site (Of Body and Spirit, and A Tale of Two Holy Days) so for the moment, let’s try to enter into what the experience might have been like for a follower of Yeshua at the time.

At the time of this writing, a second book is being finalized, as a sequel to the Last Seder of James. Entitled “I Am Priscilla”, it is a first-person memoir-style account of the Fifty Days of the Omer–from Passover to Pentecost. In the book, the narrator and titular character, Priscilla, recalls many of her first-hand experiences during and immediately after Yeshua’s earthly ministry. Below is an excerpt which describes the events of that original outpouring of the Spirit.

Note: This being a work of historical fiction, some poetic license and literary imagination is applied to the biblical record. For example, what is described as the “sound of a mighty wind” in Acts 2 is here depicted as an actual wind, straight down from above. And what’s described as “tongues like flame” is depicted as a burning light, but not a harmful one (perhaps like the Burning Bush.) Hopefully, this helps the reader to apply his or her own imagination to the words of Scripture, and deeply identify with the characters involved.

Priscilla’s Pentecost (from the novel “I Am Priscilla”)

None of us disciples were travelers, or worldly wise at the time. We all spoke Hebrew and Aramaic, and some spoke a smattering of Greek. So as more and more Jews poured in from the diaspora to celebrate Shavu’ot (The Jewish Feast of Weeks) at the Temple, we felt increasingly and hopelessly small. But every time someone talked about the call to make disciples in “Jerusalem, Judea, Samaria and the ends of the earth,” someone else would remind them that Jesus simply said to “wait.”

So that’s what we did. We gathered in the Upper Room to pray, and at the Temple to celebrate Shavu’ot. In our eyes the world had been turned upside-down, but we just continued on like everything was normal. The Twelve. The Seventy. James and his brothers. Mary and the women. Aquila. All of us.

We may have been plan-less, but that didn’t mean we were clueless. “Stay in the City—” Jesus said on Omer 40, before his ascension. That’s easy. No one left Jerusalem during the final week of the Omer. If you were still there from Passover, it’s because you were staying for Shavu’ot, “—until you are clothed with power from on high.” Something was going to happen on the day of Shavu’ot. We couldn’t plan it. All we could do was wait and pray.

When that morning came, we were all in our usual place at the Temple. At the third hour, the shofar blast came, and the account of Moses at Mount Sinai was read aloud:

Then Moses went down from the mountain to the people, consecrated them, and then, they washed their clothing. In the morning of the third day, there was thundering and lightning, a thick cloud on the mountain, and the blast of an exceedingly loud shofar. All the people in the camp trembled. Then Moses brought the people out of the camp to meet God, and they stood at the lowest part of the mountain. Now the entire Mount Sinai was in smoke, because Adonai had descended upon it in fire. The smoke ascended like the smoke of a furnace. The whole mountain quaked greatly.When the sound of the shofar grew louder and louder, Moses spoke, and God answered him with a thunderous sound. Then Adonai came down onto Mount Sinai, to the top of the mountain. Adonai called Moses to the top of the mountain, so Moses went up.

Purified garments. Fire. A thunderous sound from heaven. We listened to the Scriptures, and in that moment we knew we were about to be “clothed in power from on high,” but we were terrified to imagine what it might mean.

That was when the wind came. Not from the East or the West, but straight down on our heads from above. One hundred thousand hands went up to shield our heads from the onslaught, but it was no use. The wind forced everyone to the ground. We feared the entire city would collapse under the pressure. But then it stopped in an instant, and I felt a burning sensation in my hands, as if my hair had caught fire. I jerked them away from my head, and looked at my companions, who all had flames on their heads as well. What is going on? I wondered incredulously.

I turned to Aquila, to warn him that his hair was on fire. But my words sounded strange, as if I were speaking Egyptian. Aquila shook his head in confusion, and replied in something like Akkadian. Is this the Tower of Babel all over again? Just as I was about to panic, my heart felt a rush like my chest was going to explode, and that’s when the words came pouring out of my mouth. My hands floated into the air, and I made one declaration after another in pure gibberish. I had indeed lost my mind. But my spirit reassured me that it would return soon enough.

Suddenly I knew: My words were a prophecy. They were gospel. I didn’t know what I was saying, but I nevertheless felt truth coursing through my veins, and warming my bones. I saw the faces of my brothers and sisters doing the same. I saw foreigners all around us with gaping eyes and slackened jaws.

We’d all come to celebrate the arrival of the Children of Israel at a Holy Mountain. The receiving of a Law. The birth of a Nation. But now a new Word was being spoken: the new Holy Mountain was the Temple. And the new Temple was us. The Law that was once etched on stone was now being written on our hearts. The Nation once birthed now had a message for every nation, spoken in every language, and delivered with a mighty wind and a fire from heaven. Where once Adonai clothed his chosen leader with radiant power, he was now placing his mantle of authority on all who believe in the Son. And in that moment we were truly clothed with power to be his witnesses in Jerusalem, but also in Judea, Samaria and the ends of the earth.

Shavu’ot would never be the same again. And neither would anything else.